Zen and the art of motorcycles 2

My partner is restoring a 90's dirt bike and I am finding the process very inspiring.  There are some challenges to capturing the fast moving processes in the garage, but also opportunities to study muddy, intricate mechanical parts.

Some of my previous explorations in mixed media have come in very handy, allowing me to layer, collage and use opaque media (gouache) to build the image. 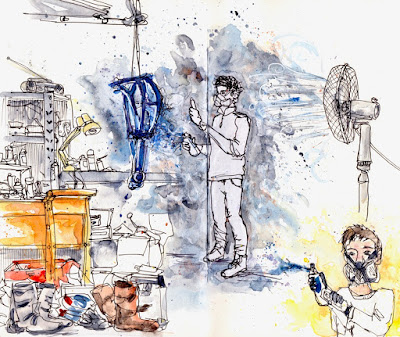 Spray painting the bike frame, the fumes were all encompassing.  Waiting for the action to start gave me opportunity to explore the clutter that accumulates around the restoration process in the garage. 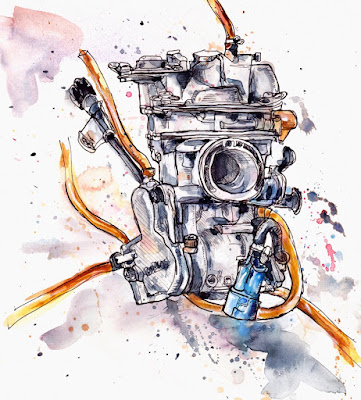 I "borrowed" the carburettor and sketched it like I would a building. 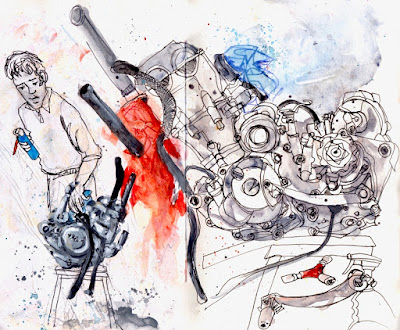 Back to the action.  Here I was drawing the motor as it was being cleaned, which meant it had to change positions fairly often.  I decided to carry on with my lines through the movement.  So rather than an exact sketch of the motor, it is an amalgamation of the things I saw as I drew.
Then I experimented with gouache marks to represent the different parts on the smaller sketch. 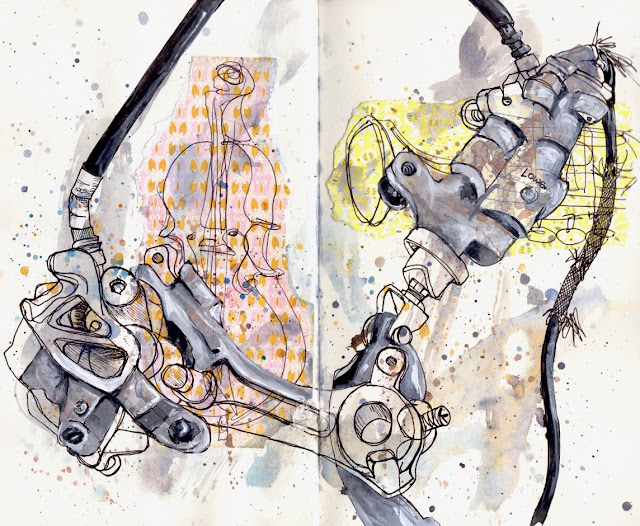 And this is where the project has led me so far - utilising lots of my mixed media tricks!
The collage elements were drawn from life on scraps of scrapbook paper on one of my many trips to the music store with my partner - another of his hobbies that I find inspiring.  I already had them stuck to the sketchbook page, so I drew the brake parts straight over top.  Selected areas of gouache to pick out details and splattered watercolour for the years of mud and grime!